The Times They Are A-Changin'

Come mothers and fathers throughout the land
And don't criticize what you don't understand
Your sons and your daughters are beyond your command
Your old road is rapidly agin
Please get out of the new one if you can't lend a hand
For the times they are a-changin' (Bob Dylan)
"Things are not like they used to be" is complaint uttered by perhaps every generation that has graced the this good Earth. Moreover, this complaint is usually issued as a view about the behavior, attitudes, and lifestyles of the current younger generation. Sometimes this utterance is followed with a wish to return to the good old days. These generalizations like any simplified analysis of life on our planet cannot be valid.

Inherent in the claim, "Things are not like they used to be," is the implication that going back to an earlier, simpler time would be preferable to living in today's world. Of course, that specific notion is impossible. Furthermore, I assert that returning to the past would not be desirable.

Granted horrific things happen daily, but the past is filled with a multitude of injustices. In our own country, land was taken from the natives, Japanese American citizens were interned, a race of people were enslaved, and African-Americans were denied access to housing, education, and the right to vote. Maybe the past has been difficult, and the present is problematical.

In thinking about evil in the world, one might be tempted to give up and throw in the towel. What should we do instead? Of course, you know the answer. We need to stand up for fairness and justice. We need to right the wrongs that we can. By attempting to move ethically and morally forward, we help humankind. Maybe we cannot cure all of the ills in the world, but giving up is not an option.

I am encouraged by the efforts of many young people. For example, two youths, Nick Anderson and Ana Slavin, were highlighted for good works on the evening news. Nick and Ana started a national campaign called Dollars for Darfur. These two high school students began a campaign to raise money to help Darfurians. In another instance, this past week, Mimi Lenox, organized a Blogblast for Peace, in which Peace Globes and entries about peace were posted throughout the blogging community. Mimi, Nick, and Ana represent people devoted to building a better day and a better tomorrow. People like this give us hope for the future. People like this give us courage to do better. People like this have not given up on the today's world, and I will not give up either.

Can you think of other people working to make a better world?

I know many people who are trying to volunteer in small ways, send money and fit in what they can in busy lives. They are my heroes. I have been more of a money sender lately, but would like to get into the volunteer side of things when my last child is out of the nest. (sniff) My college daughter is thinking of working for Job Corps for a year before going to grad school. (It's kind of like a domestic Peace Corps)

I don't have much to contribute right now financially, but I have in the past, had foster children form other countries.
I have volunteered in the past..Alzheimer society, at the kids school, the local church.
I think that if every person could perform one small act of kindness..just one..wouldn't the world be a better place?

What comes to mind for me is the message we heard from authors Gulley and Mulholland during their recent visit. I agree with their premise that hell is killing us. Once you accept the belief that there is a place called hell, you begin to chose who goes there and who does not; who God is for and who he is against. This gives credence to discrimination, racism, homophobia, violence, and all manner of hatefulness in the name of God. It’s disgusting. Philip Gulley and James Mulholland are working to make a better world by asking us to examine our beliefs and how they affect the people in our lives. Let love and grace prevail. These times NEED a-changin!

The people I admire most are the every day ones, who actually take care of and pay attention to their families. I think that's the hardest thing to do.

.....the good bad old days. Yes every generation sends a hero up the chrts says Paul Simon in a song.
I like the story of the old man sitting at the gate of a town and when asked by new-comers "excuse me sir, what is this town like?"
The old man answers by asking: "what was the last town like you left?...and whawever the new-comers reply, whether good or bad or indifferent, the old man answers: "you'll find this town exactly the same as the town you left.
I know we face great difficulties now with the climate and war but they were always there. I suppose a great crises is need to generate/ bring people together. We all know the word in or meaning of crises in chinese is opportunity.
It is also a time when a leader emerges. We sure could do with one. Sorry for going on too much.
Great post
Y;-) Paddy

I'm still a little mad at the Hippie generation for not legalizing pot, but I still have hope for the future. ;)

it has to start by being a good neighbor. to the people next door who drive you batty.

If we can't get along with the people on our street then how can we have peace anywhere else??

The "new" internet way to help is neat. It was a great insight and developed a long way. 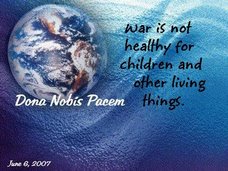